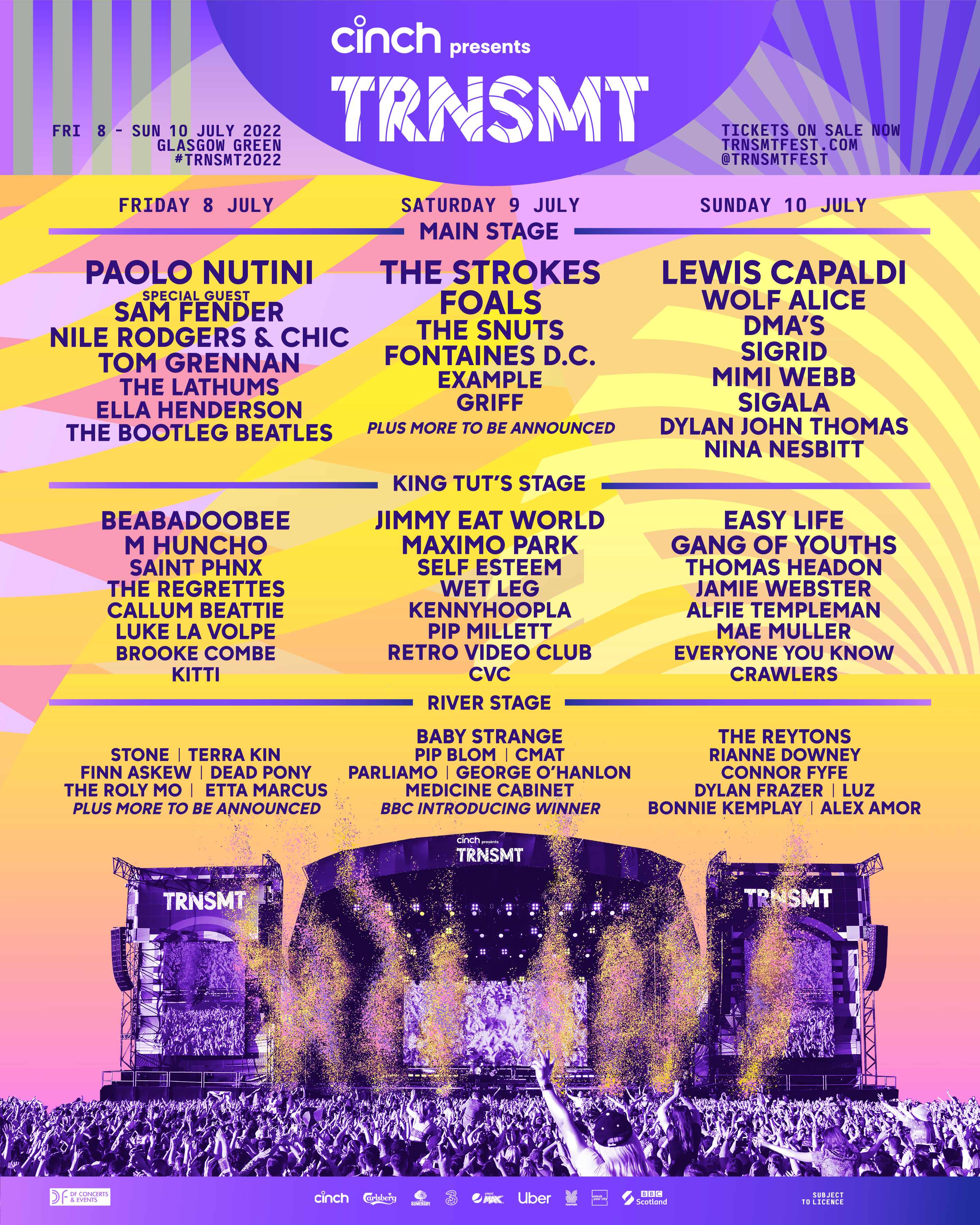 We have just revealed more artists for this summer’s musical tour de force at Glasgow Green. With brilliant artists including Saint PHNX, Baby Strange, Rianne Downey, The Reytons, Stone plus many more who will be joining Paolo Nutini, Lewis Capaldi, The Strokes, Nile Rodgers & CHIC, and recent Brit Award winners Wolf Alice and Sam Fender on this summer’s hottest festival line up.

Joining Friday 8th July’s stellar line up alongside Paolo Nutini, Sam Fender, Nile Rodgers & CHIC, are Scottish duo Saint PHNX. The now TikTok famous brothers from Lanarkshire, who recently signed to Atlantic Records, will take to the King Tut’s stage this year, after hitting the top spot on the Scottish chart with their most recent release ‘Happy Place’ last week.

Bruising post punk band Stone, who exploded onto last year’s festival stages with raucous anthems following their 2020 breakout single ‘Leave It Out’, will also perform on the River Stage alongside Finn Askew, one of NME’s essential emerging artists of 2022, alternative indie duo Dead Pony and London based singer-songwriter Etta Marcus.

Headlining the River Stage on Saturday 9th July is vibrant indie rockers Baby Strange. The trio who last year released their critically acclaimed second album Land of Nothing, are sure to wow the TRNSMT crowd with their punk passions and dirty dance floor bangers.  Also performing on the River Stage will be Parliamo, the Perthshire ‘underground pop’ band with an explosive live reputation. They will be joined by singer songwriter George O’Hanlon who released his emotive debut EP, The Storm last year; alongside Edinburgh’s own riot girl band, Medicine Cabinet and Irish singer-songwriter CMAT.

Joining Sunday’s lineup are multifaceted duo Everyone You Know who will bring their eclectic sound which incorporates everything from punk to garage to Glasgow Green this July. They will be joined by indie rockers The Reytons, Glaswegian singer-songwriter Rianne Downey; and Bonnie Kemplay who, last year, claimed the top spot ahead of over 10,000 entries from some of the UK’s very best undiscovered and under the radar musicians, to land a once in a lifetime opportunity to perform in the world-famous Radio 1 Live Lounge.

Bonnie will be performing alongside Glaswegian singer-songwriter and flautist Alex Amor, as well as Scottish pop star Dylan Fraser who was recently signed to Atlantic Records and Irish singer-songwriter Luz. Making his TRNSMT debut on Sunday 10th July will be the youngest artist on the bill - 15-year-old Scottish singer songwriter Connor Fyfe - who supported The Snuts on their recent tour and who is most definitely one to watch.